It’s a New Year! Now’s the time to make our goals and committments to a healthier life. But, what if we just decide to try new flavors. ingredients and dishes this year? You might learn more about nutrition and be creative in the kitchen.

Let’s start with farro, pronounced (fahr-oh), one of the oldest grains that was originally found in the fertile lands of the Middle East. Then, it became popular in Italy and throughout Europe. 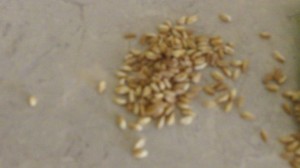 Farro not only tastes good (it has a nutty flavor) but it’s also nutritious, with its high fiber and protein content. As a wild wheat grain, it does contain gluten, so celiacs should consult with their physician. The pearled farro (removing the outer husk of the seed) shortens cooking time.

It’s a versatile grain which can be used for any meal or side dish when blended with vegetables and spices. Try it with maple syrup or honey and walnuts for a hearty breakfast! Farro is used frequently for breads and flours, including as a soup, substituting other grains for farro.

To prepare, first rinse the grains and then place 1 cup of farro for 3 cups of water, bringing to a low boil for 15 minutes or until “al dente”. Farro can be used in salads with chopped dill and parsley, sliced tomatoes and onions, balsamic vinegar, olive oil and your favorite spices.  Enjoy!

Posted in Recipes
← Pear up your life!Pregnancy and Nutrition: Can I Eat For Two? →